News from the Front: The Reaver Titan Meliora Bellator has been deployed to smite the enemies of mankind.
Tremble in fear at the Titan’s Mighty Tread™
Gasp in awe at the power of the Melta Cannon™
Feel the power of my huge resin Penis Extension™

Yes, the titan is done.
Four months (take out about a month because of the christmas holidays and that one week where nothing could happen because I was waiting on stuff)

about £700 in costs and a modicum of blood and sweat, no Tears, I did get frustrated at various points but nothing worthy of crying over.

This won’t quite be the end of this project, I’m planning to extend the armaments of the Titan to include some of the other Arm Weapons and possibly some Carapace weapon conversions.
The prospect of giving it an Inferno Cannon pleases me possibly a bit too much.

In any case, here are the photos I took at my local Games Workshop. Unfortunately no pics of the back, but there isn’t much I really care to show off about the rear end of a titan 😛 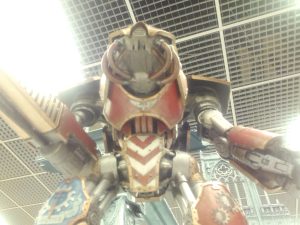 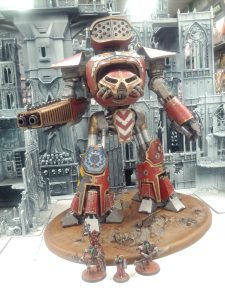